Every year, SAO celebrates Father’s Day before Sunday to honour the gentlemen and fathers of the Office and their contributions to families, churches, villages and society as a whole. 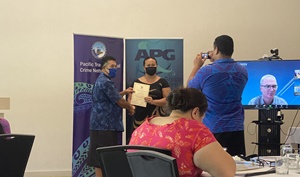 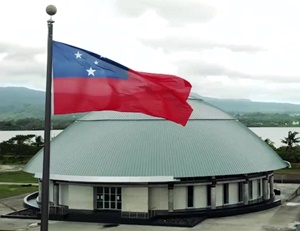 The Official Ceremony for the Dissolution of the XVIth Parliament of the Independent State of Samoa was held Wednesday 3rd of March 2021 at the Maota Fono, Mulinuu. The ceremony commenced at 10am and was attended by His Highness the Head of State, Afioga Tuimalealiifano Vaaletoa Sualauvi II, the Honorable Prime Minister, Susuga Hon. Tuilaepa Dr. Sailele Malielegaoi, and among the honorable members of Cabinet and Parliament, the respected members of the Standing Orders Committee.

In attendance also were the Chief Executive Officers of Government Ministries and Heads of Government Departments and Institutions. Among them was the Controller and Auditor General, Fuimaono Papalii C. G. Afele.

As the XVIth Parliament dissolves, the Office of the Controller and Auditor General, the Samoa Audit Office, wishes to acknowledge the Honorable Minister, Afioga Sala Fata Pinati, and especially the Honorable members of the Standing Orders Committee (SOC).

The Samoa Audit Office prepares and compiles a report of all its audits and activities for each financial year. The result of its operations includes audit findings, recommendations, and responses from audited entities. The Samoa Audit Office also compiles a report of all irregularities investigated and reported by the Ministry of Finance. Once the compilation of these reports is complete, they are presented by the Controller and Auditor General (CAG) to the Speaker of the House, who presents these reports to Parliament, who in turn give them to the SOC for review. The report compiled by the SOC on their review findings is then presented to Parliament for discussion and debate.

Pursuant to Standing Order 162 of the Standing Orders 2016, once the SOC Report is submitted to Parliament, the Reports on the Operations of the Samoa Audit Office and the Irregularity Reports can then be made public.

Much of the work in this process is to ensure that in the spirit of natural justice, audited entities are given an opportunity to respond to issues relating to them before these reports are released to the court of public opinion.
(To read more on this process, click here to download our publication "Understanding our Audit Reports")

The Honorable members of the SOC for the XVIth Parliament of the Independent State of Samoa were:

The SOC was chaired by Tofa Nafoitoa Talaimanu Keti, the Member of Parliament representing Gagaemauga No. 3 constituency. The XVIth Parliament (2016-2021) is the former Assistant Police Commissioner's first election into the Legislative Assembly. In this Parliament, Tofa Nafoitoa was also appointed the Deputy Speaker of the House. During this 5 year term, the Samoa Audit Office has worked together with the Honorable Chairman and members of the SOC in the process of reporting on the operations of the Samoa Audit Office and government irregularities to Parliament.

In reviewing SAO's reports tabled in Parliament, the SOC convenes and summons the audited entities included in the audit reports, and any other entities/individuals required by the SOC for their review. They gather information and explanations on the issues raised and remedial actions undertaken to address them. They can also undertake site visits to oversee any works listed in the reports. The below table is a summary of the work performed by the Chairman and members of SOC together with the SAO in the conducting of their reviews for the listed reports during their 5 year term:

The Honorable members of the SOC also includes Samoa’s longest serving opposition MP, Afioga Hon. Aeau Dr. Peniamina Leavai, who after serving 26 years in Parliament now enters retirement. The Samoa Audit Office commends the Honorable Aeau on his service in the SOC, on his long and successful tenure of service to his constituency and his country, and wishes him a happy and peaceful retirement.

The Samoa Audit Office offers its appreciation to its Honorable Minister, Hon. Afioga Sala Fata Pinati, and the Chairman and members of the Standing Order Committee.